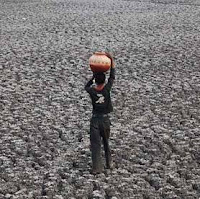 When groundwater is rapidly consumed, recharge to the original levels by natural process can take months or years. If corrective actions are not taken, it may lead to famine due to collapse of agricultural output and severe potable water scarcity.
One of the easiest ways to recharge ground water is by implementing Rain Water Harvesting (RWH) in all
RAIN WATER HARVESTING
In the present scenario management and distribution of water has become centralized. People depend on government system, which has resulted in disruption of community participation in water management and collapse of traditional water harvesting system.

As  the water crisis continues to become severe, there is a dire need of reform in water management system and revival of traditional systems. Scientific and technological studies needs to be carried out to assess present status so as to suggest suitable mitigative measures for the revival to traditional system/wisdom. Revival process should necessarily be backed by people's initiative and active public participation.
Living creatures of the universe are made of five basic elements, viz., Earth, Water, Fire, Air and Sky, Obviously, water is one of the most important elements and no creature can survive without it. Despite having a great regard for water, we seem to have failed to address this sector seriously. Human being could not save and conserve water and it sources, probably because of its availability in abundance. But this irresponsible attitude resulted in deterioration of water bodies with respect to quantity and quality both. Now, situation has arrived when even a single drop of water matters. However. " better late than never", we have not realized the seriousness of this issue and initiated efforts to overcome those problems.

System of collection rainwater and conserving for future needs has traditionally been practiced in India. The traditional systems were time-tested wisdom of not only appropriate technology of Rainwater Harvesting, but also water management systems, where conservation of water was the prime concern. Traditional water harvesting systems were Bawaries, step wells, jhiries, lakes, tanks etc. These were the water storage bodies to domestic and irrigation demands. People were themselves responsible for maintenance to water sources and optimal use of water that could fulfill their needs.
What is Rainwater Harvesting?

The term rainwater harvesting is being frequently used these days, however, the concept of water harvesting is not new for India. Water harvesting techniques had been evolved and developed centuries ago.
Ground water resource gets naturally recharged through percolation. But due to indiscriminate development and rapid urbainzation, exposed surface for soil has been reduced drastically with resultant reduction in percolation of rainwater, thereby depleting ground water resource. Rainwater harvesting is the process of augmenting the natural filtration of rainwater in to the underground formation by some artificial methods. "Conscious collection and storage of rainwater to cater to demands of water, for drinking, domestic purpose & irrigation is termed as Rainwater Harvesting."
Why Harvest Rainwater? 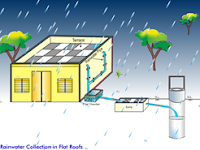 This is perhaps one of the most frequently asked questions, as to why one should harvest rainwater. There are many reasons but following are some of the important ones.
How to Harvest Rainwater:
Broadly there are two ways of harvesting rainwater:
(i) Surface runoff harvesting
(ii)Roof top rainwater harvesting
Surface Runoff Harvesting:
In urban area rainwater flows away as surface runoff. This runoff could be caught and used for recharging aquifers by adopting appropriate methods. 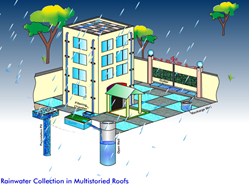 Roof Top Rainwater Harvesting (RTRWH):
It is a system of catching rainwater where it falls. In rooftop harvesting, the roof becomes the catchments, and the rainwater is collected from the roof of the house/building. It can either be stored in a tank or diverted to artificial recharge system. This method is less expensive and very effective and if implemented properly helps in augmenting the ground water level of the area.

Methods of Roof Top Rainwater Harvesting
In this method rain water collected from the roof of the building is diverted to a storage tank. The storage tank has to be designed according to the water requirements, rainfall and catchment availability. Each drainpipe should have mesh filter at mouth and first flush device followed by filtration system before connecting to the storage tank. It is advisable that each tank should have excess water over flow system.

Excess water could be diverted to recharge system. Water from storage tank can be used for secondary purposes such as washing and gardening etc. This is the most cost effective way of rainwater harvesting. The main advantage of collecting and using the rainwater during rainy season is not only to save water from conventional sources, but also to save energy incurred on transportation and distribution of water at the doorstep. This also conserves groundwater, if it is being extracted to meet the demand when rains are on.
Recharging ground water Aquifers
Ground water aquifers can be recharged by various kinds of structures to ensure percolation of rainwater in the ground instead of draining away from the surface. Commonly used recharging methods are:-
a)         Recharging of bore wells
b)         Recharging of dug wells.
c)         Recharge pits
d)         Recharge Trenches
e)         Soak ways or Recharge Shafts
f)          Percolation Tanks 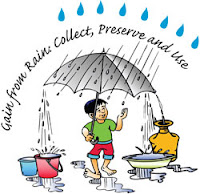 Ensure that the Rainwater Harvesting arrangement in your building is maintained properly & reap maximum benefit.
Gain from Rain. Collect, Preserve and Use
WATER IS PRESIOUS! SAVE EVERY DROP!
"Never doubt that a small group of thoughtful committed individuals can change the world; indeed, it is the only thing that ever has." - Margaret Mead
Change Begins with you