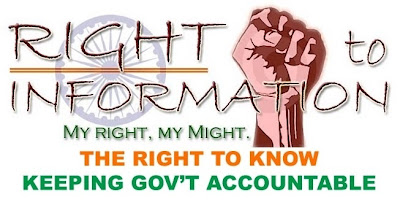 RTI is a weapon to stop corruption, bring out transparency, make Government and Non-Government agencies more efficient and above all end the bureaucratic exploitation of common citizens of India.
We often have to pay bribes in our interaction with government departments - be it getting a license, passport, ration card, registering an FIR etc. Sometimes even if bribe is not asked for, our work is still not done due to complacency of public officials and bureaucrats which results in our harassment and loss in cognitive energy. We all pay taxes. This money is taken from us with an assurance from government that it will be used for our well being. But nothing happens. Where does this money go? There is no water to drink in a country which has large number of water resources. The condition of the roads is so pathetic due to which many times people loose their lives. The government hospitals have no medicines in their stock, patients are living in insalubrious conditions and doctors are not present at the time of their duty. During rainy season the drainage system doesn't work properly. Likewise every department is deep involved in corruption and entire system has become rotten. They perform their duty only when some VIP is on a visit and complete the work in haste which is temporary.
So far people were helpless and could only curse the inefficiency and ineffectiveness of the system and be a mute spectator. But now, we have a right to question the government, inspect their work, inspect their files, take copies of government documents and make them answerable for every question shot at them. The Parliament of India has passed a law which makes the common man of the country the ruler in the real sense. This law is known as Right To Information.
Right To Information Act came into force on 12th October, 2005. This Act empowers the citizens of our country to actively participate in the governance of the society and give a befitting reply to corruption. RTI Act enables the common man to closely monitor the functioning of all the departments under the purview of either the Central or State government or any other body which is created as per Constitution of India or by an Act of Parliament or Act of State legislature. Even the private organizations who are not directly under the purview of the RTI Act have some obligations.
The organizations either private or NGO's which benefit partly or substantially from the government are also under the purview of this Act. There are some organizations who are not covered in this Act, but the exclusion is not absolute and these organizations have an obligation to provide information pertaining to allegations of corruption and human rights violation. 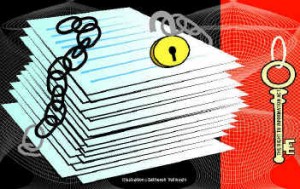 THE RIGHT TO INFORMATION ACT, 2005
An Act to provide for setting out the practical regime of right to information for citizens to secure access to information under the control of public authorities, in order to promote transparency and accountability in the working of every public authority, the constitution of a Central Information Commission and State Information Commissions and for matters connected therewith or incidental thereto.
Whereas the Constitution of India has established democratic Republic;
And whereas democracy requires an informed citizenry and transparency of information which are vital to its functioning and also to contain corruption and to hold Governments and their instrumentalities
accountable to the governed;
And whereas revelation of information in actual practice is likely to conflict with other public interests
including efficient operations of the Governments, optimum use of limited fiscal resources and the
preservation of confidentiality of sensitive information;
And whereas it is necessary to harmonise these conflicting interests while preserving the paramountcy
of the democratic ideal;
Now, therefore, it is expedient to provide for furnishing certain information to citizens who desire to have it.
Guide For the Information Seekers Under the Right to Information Act, 2005

Object of the Right to Information Act

The basic object of the Right to Information Act is to empower the citizens, promote transparency and accountability in the working of the Government, contain corruption, and make our democracy work for the people in real sense. An informed citizenry will be better equipped to keep necessary vigil on the instruments of government and make the government more accountable to the governed. The Act has created a practical regime through which the citizens of the country may have access to information under the control of public authorities.

Information is any material in any form. It includes records, documents, memos, e-mails, opinions, advices, press releases, circulars, orders, logbooks, contracts, reports, papers, samples, models, data material held in any electronic form. It also includes information relating to any private body which can be accessed by the public authority under any law for the time being in force.

Right to Information under the Act

Exempted Organisations
The List of 22 exempted organizations is given below:

"Never doubt that a small group of thoughtful committed individuals can change the world; indeed, it is the only thing that ever has." - Margaret Mead
Change Begins with you
Join Hands if you wish to be part of our Team and share your Ideas for a Better society