Philanthropy etymologically means "the love of humanity", in the sense of "what it is to be human", the essence of our humanity. In modern practical terms, it is "private initiatives for public good, focusing on quality of life" balancing the social-scientific aspect emphasized in the twentieth century, with the long-traditional and original humanistic core of the word's ancient coinage.


Community Involvement
Put simply, philanthropy is the pursuit of excellence in every facet of human life, for every human life, by imagining and implementing new systems, to bring that philosophy to fruition.

An important distinction should be made, that while being admirable, charity is not the same as philanthropy. Simply argued by the concept that an implemented philanthropic idea may make its owner rich, if he or she so wishes. Compare this to the singular act of giving money away, associated with charity; the two concepts almost oppose each other. "A philanthropist knows the act of philanthropy before knowing the definition of the word".

It should come from Heart

True enlightenment is the situation when we understand and perceive the world as it is. No light is going to come and hit our head bestowing us with universal wisdom because there is no such thing. Any claim of lights hitting the head can be easily disposed because the there is a whole range of illusions that the human mind is so capable of producing. As mentioned before, this is a precious life, this is a beautiful life, and this is a wonderful life. The love that we feel towards others should come from within. It should be derived from a modern sense of compassion that is empirical rather than from any religious indoctrination. We have to realize that our existence depends on the presence of other people in this world and that should be our philanthropic source!
An overview of philanthropy in India
While charitable giving by the wealthy is widespread in countries like the United States, it is far less established in developing nations such as India and China. 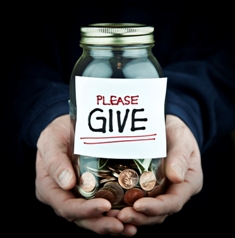 India’s booming economy – Atleast one figure in the top five on the Forbes list of the world’s wealthiest individuals. But philanthropic activity has failed to keep pace, partly because the rapid accumulation of individual wealth is a still a relatively new phenomenon.  “We have a history of scarcity and so it takes a while to build confidence that the future will be better on a sustainable basis and let go of newly earned wealth,” In India, individuals and companies account for just 10 percent of charity funding, compared with 75 percent in the United States. Traditionally, so-called “old money,” embodied in the likes of India’s 142-year-old Tata Group conglomerate, has focused on promoting the welfare of workers, with healthcare and housing. Other big Indian business houses gave money for building Hindu temples and other religious causes. Rich individuals also helped in their family villages by building schools and wells.
The need for charitable funding in India is self-evident.
Some 42 percent of Indians, or 455 million people, live on less than $1.25 a day, according to the World Bank and India’s statistics on health, infant mortality and malnutrition are worse than those for sub-Saharan Africa. But there’s little sign yet of India’s rich taking “The Giving Pledge” — an initiative by Microsoft co-founder Bill Gates and billionaire investor Warren Buffet that asks the wealthy to donate half their fortunes to charity.
Write your thoughts and point of vie on various subjects, Write to us at info.kenfoundation@gmail.com
Join Hands if you wish to be part of our Team and share your Ideas for a Better society
http://ken-foundation.blogspot.com/